Where I thought I was going was to Ray and Deanna’s house. They are very good friends who took care of us (along with a thousand other people) when we were unable to do so ourselves.

Where I was actually going was to somebody else’s house who I had never met before, and who I possibly would never have met had I actually been going where I thought I was going.

One hour later I headed back home having made a new friend. In my arms I carried two items.  One of the items is this: 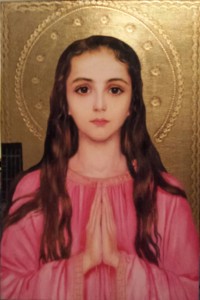 Funny, I had a miniature version of this image that I had picked up many years ago. You can probably tell right off the bat why I’ve always loved this image. It’s not a particularly common image, but there it is. It’s big too. It’s from Italy.

The other image is that of a saintly old Capuchin friar from Detroit. I always liked him for his example of simplicity and humility. I also liked that he played the fiddle.

“Funny,” I thought, “just a few hours earlier I was with Daisy at a fiddle contest.” In fact, this is the same contest where exactly one year ago another new acquaintance took a picture of our family – all six of us. We loved it so much we used it as our Christmas picture. It’s the picture of Sadie you see on our website. She’s wearing pink, like the little girl in the picture.

Who gave me these things? A neighbor named Mary. I learned that her sister took her own life a few years ago. She didn’t know me, or anything about Sadie. I knew nothing of her. We talked about grief, and how we are all molded by the cross. How did we meet on the street? Pure accident.

Funny how God writes straight with crooked lines isn’t it?

Young people, your life may take you many places you never intend to go.  That’s OK. God reveals his plan for you slowly. Be patient with yourselves. You’ll get there eventually – it just may not be the route you planned to take.

Kind of like my walk to Ray and Deanna’s house.

And you may pick up some treasures along the way.